BRYAN ALLEN FIERRO holds an MFA from Pacific University in Oregon. He grew up in Los Angeles and now splits his time between Los Angles and Anchorage, Alaska, where he works as a firefighter and paramedic. Fierro is the recipient of the Poets & Writers Maureen Egen Writers Exchange Award in Fiction, and recent recipient of the Rasmuson Individual Artist Award for literary and script works. Latino Stories named him one of the top ten new Latino writers in 2017. His stories have appeared in Copper Nickel and Quarterly West. His debut short story collection is Dodger Blue Will Fill Your Soul (The University of Arizona Press, Camino del Sol series.) With finalist appearances at several National and International film festivals, his screenplay, Inside Passage, won Best Screenplay at the 2019 Los Angeles Cinefest. Bryan has adapted Best-Selling author, Luis Alberto Urrea’s Into The Beautiful North and The Hummingbird’s Daughter for screen and television. 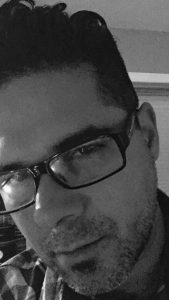