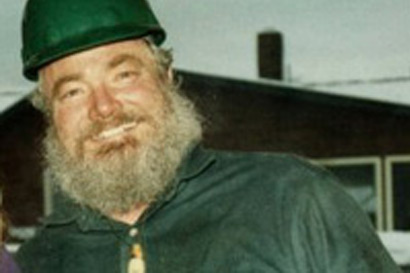 Buckwheat Donahue was the founder of the North Words Writers Symposium. He lived in Skagway year-round from 1984 to 2018 and succumbed to various health issues on October 14, 2019 in Oklahoma City, where he had moved.

He grew up in Oklahoma, Colorado, Kansas and Wyoming. He walked from Miami, Florida to Whitehorse in the Yukon and then paddled down the Yukon River to Kotlik on the Bering. The journey was a fund raiser for the Skagway Clinic.

His love for his part of the world was un-wavering. Though not a writer himself, he found great enjoyment in reading, and was a popular performer of Robert W. Service verse and Jack London stories. He was the Municipality of Skagway’s Tourism Director from the end of the last century until 2015, and also was the founder of the Buckwheat Ski Classic, a cross-country ski race held here annually in March.

When in his presence, everyone was encouraged to howl, and North Words will forever begin with a Howl for Buckwheat!